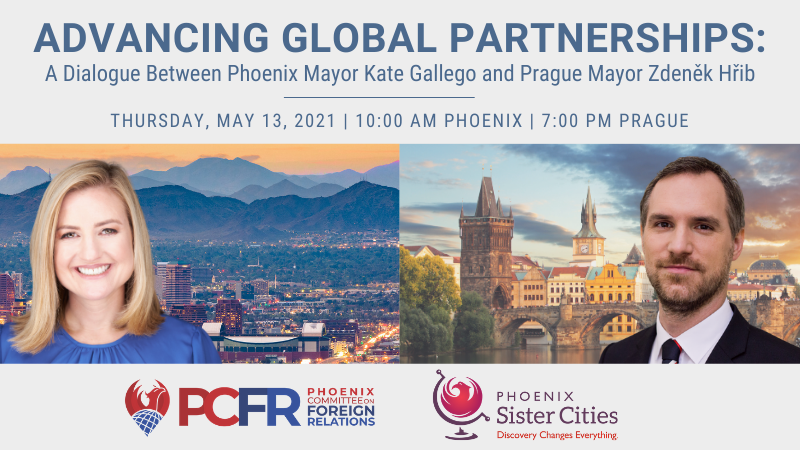 In partnership with the Phoenix Committee on Foreign Relations, we are pleased to present a VIRTUAL dialogue with Mayor of Phoenix Kate Gallego and Mayor of Prague Zdeněk Hřib.

Join us and moderator Akram Rosheidat, Phoenix Sister Cities Prague City Committee Chair, at 10 am on Thursday, May 13, 2021.

Mayors Hřib and Gallego will explore common issues and priorities for their respective cities, including sustainability and Smart Cities, inclusivity and equity, and economic development.

Mayors Hřib and Gallego lead large and growing cities:  one the capital of a nation in the heart of Europe; the other the fastest growing city in the American West. In 2019, Mayor Hřib was the first member of the Pirate Party in Europe to be elected mayor of a large 1st tier city. Also, in 2019, Mayor Gallego was the youngest mayor elected to run a large 1st tier city in the United States.

The Pirate Party was founded in Sweden in 2006. It spread throughout Europe, coming to the Czech Republic in 2009. There are now 22 members of the Pirate Party in the Czech Chamber of Deputies and 3 members in the Czech Senate. Currently, the Czech Pirate Party – in coalition with The Mayors and Independents Party – is leading in the polls for the upcoming general election, which will take place in October this year.

Registration is hosted by the Phoenix Committee on Foreign Relations.  Click on the link below.