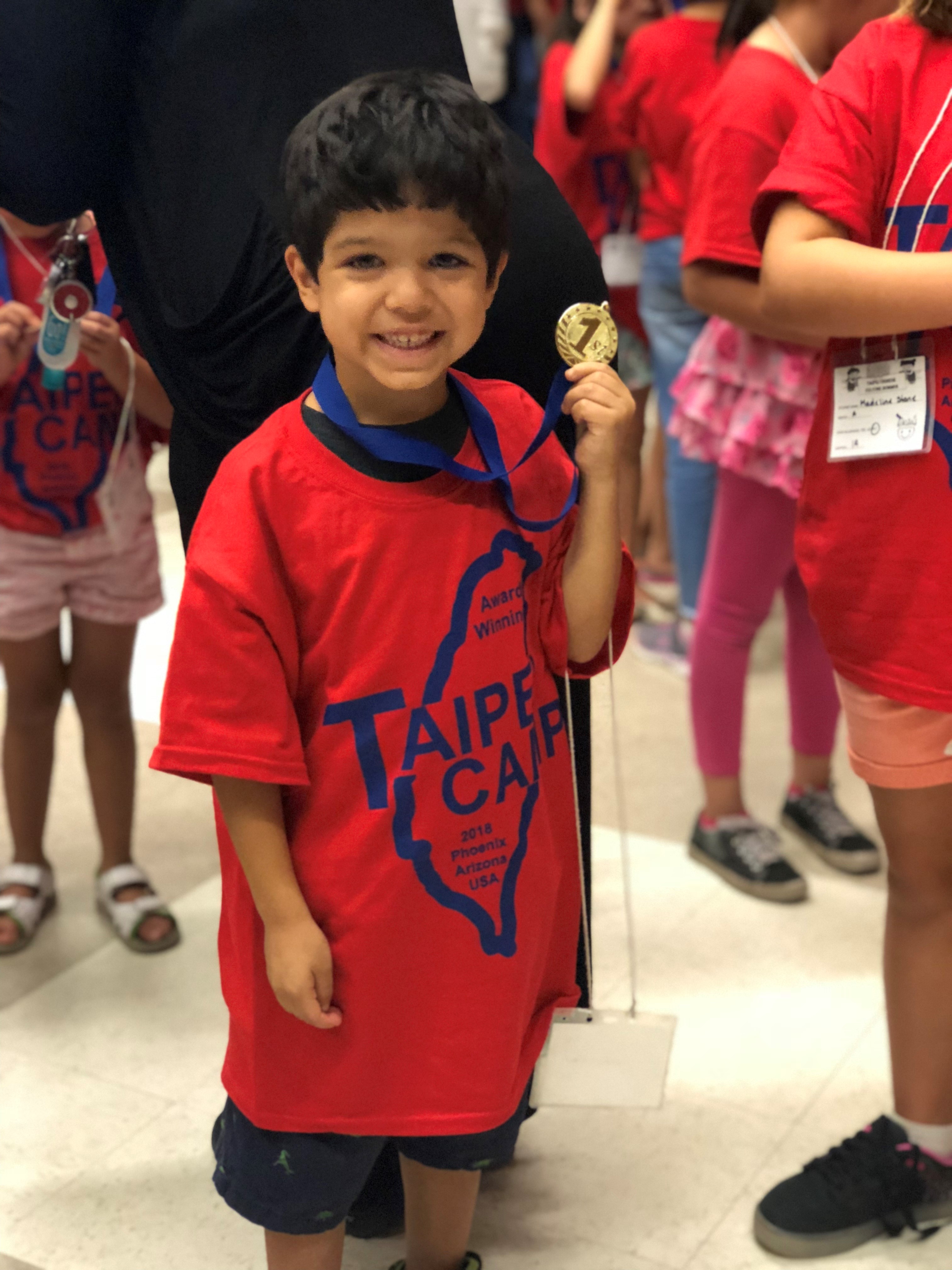 Solece Lopez, Summer Assistant to the Vice President, wrote about her experiences volunteering for the Taipei Chinese Culture Summer Camp for 2018:

This year, the 22nd annual award-winning Taipei Chinese Culture Summer Camp was held at Magnet Traditional School, marking the 39th anniversary of Taipei and Phoenix’s invaluable sister city relationship. This internationally recognized camp has been celebrated around the valley for the exclusive cultural experience it brings to the youth of Phoenix. Every year, instructors from Taiwan come to Phoenix to share their knowledge and lead this treasured cultural exchange.

When I was asked to attend as a volunteer, I jumped at the opportunity to relive my younger years alongside these campers, knowing that I’d have the chance to learn a thing or two myself. For the duration of the camp, I was placed with a group of thirty children, most falling between the ages of six and seven, but the camp hosts youth from a broad age range, some well into their early teen years. Each had a magnetic personality and a contagious energy that made for a great week. The youth, especially the youngest ones, were very quick to make themselves comfortable with the teachers and volunteers, making the experience even more enjoyable for those chaperoning the camp.

Every activity scheduled had a unique Taiwanese twist to it, with each instructor keeping the entire group engaged and enjoying themselves. Throughout the week, we did different paper folding crafts with Ms. Jessie Wang and Ms. Wen Chyi Chiu, who taught us basic Chinese words like Nǐ hǎo (hello) and Yīfú (clothes). We made bookmarks resembling a traditional dress, a paper spinning toy, a paper pot of flowers, hanging hearts, and a paper-folded dog. We even had the chance to decorate our own chocolate apples with the local Asahi Bakery, an activity that the campers found a particular liking to.

To burn off extra energy built up after lunchtime, Mr. William Weng showed us how to play with the Chinese yo-yo. He taught the kids how to begin spinning the yo-yo and even did quite a few tricks for the audience that really inspired the kids to become experts themselves! At the conclusion of each day, we gathered together and collaborated with another group in a Taiwanese dance routine with Ms. Hui-Chun Lin. This turned out to be one of the favorite activities among the kids because they had the chance to move around and incorporate some of the dancing props into their routines.

Beyond the exercises used to stimulate the camp goer’s creativity and cultural understanding of Taiwan, there were courses offered like CPR and self-defense that the kids got to be a part of. I had the pleasure of joining the charismatic Mr. Jui Chiu in his self-defense class. The kids and I had valuable takeaways from the experience and I even had the opportunity to take part in a demonstration from Mr. Chiu, working through different scenarios and preparing on how to best defend ourselves.

Friday’s graduation ceremony marked the end of the camp and served as a culmination of what each group learned throughout the week. The ceremony began with an introduction from Ms. Wen Chyi Chiu and Ms. Lin Ling Lee introducing their special guest speakers and visually recapping the week with photographs from each of the activities.

The ceremony progressed with wise words from special speakers and long-time supporters of the camp including Superintendent Diane Douglas, Councilwoman Debra Stark, Senator Kate Brophy McGee, and former Phoenix Mayor Greg Stanton. Members from the Governing Board of Phoenix Elementary School District #1 were also present, including Dr. Louisa Stark, Dr. Ruth Ann Marston, and Vice President of the Governing Board, Ms. Lynné Almy. This was followed by an award ceremony where the distinguished guests presented Taipei Chinese Culture Summer Camp medals to each participant of the camp.

Next, the students took to the stage and showed their peers what they had mastered throughout the week. There was a yo-yo routine and synchronized ceramic flute performance with Mr. William Weng’s students. Then, each group got to perform their unique Taiwanese-inspired dances they had learned with Ms. Hui-Chun Lin, complete with props and authentic Taiwanese music.

The Taipei Chinese Culture Summer Camp offers something students of all ages can appreciate. Whether it be giving calligraphy or ceramic whistles a try for the first time, or letting out one’s creative side with paper crafts and dancing, the camp made for a great experience that will surely keep the kids returning for years to come.

Cultural exchanges like these can never start too early on in life. Certainly, experiences designed to celebrate diversity, support team building, and heighten a global perspective have an immeasurable impact on an upcoming generation of global citizens. The more a child enriches themselves with those who are different from them, the more likely they will be able to thrive in a world that is continuously more interconnected and dependent upon the bonds nations form with one another. The campers enjoyed learning something new while the volunteers and teachers all appreciated each other’s dedication to working toward cultural exchange and intercultural education.

This camp is highly recommended as a productive way for the youth of Phoenix to spend a week of their summer mingling with other kids, reinforcing their cultural awareness, and most importantly, strengthening the cultural ties between us and one of the closest friends to the United States, Taiwan.
Special thanks to the instructors who flew thousands of miles from Taiwan to be with us, the volunteers who devoted their time to the camp, the teachers of Phoenix Elementary School District #1 for their endless dedication in equipping Phoenix’s youth with the tools necessary to succeed in the world, and Lin Ling Lee and Wen Chyi Chiu for the invaluable work they do to make this all happen.