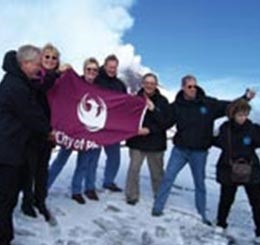 At the heart of all Sister City programs is an agreement, signed by the mayors of each Sister City, confirming the commitment of each community to the Sister City program. Sister Cities agree to send and receive delegations of various types, including political and business leaders, arts and cultural representatives, educators, and technical experts because these exchanges promote cross-cultural understanding, municipal and technical cooperation, and business opportunities. Each Sister City is supported by a committee of volunteers who are committed to the goals and objectives of the program.

Phoenix Sister Cities exists to create people-to-people relationships between the residents of Phoenix and its sister cities through commercial, educational, cultural and artistic exchange programs and events that create and sustain global, long-term, international partnerships and business opportunities for the citizens of Phoenix.

In addition to fulfilling its stated mission, Phoenix Sister Cities, through a public-private partnership, serves the city of Phoenix as the official Office of Protocol. In this capacity, it is the city’s primary contact for individuals and delegations from around the world who represent trade, government, and cultural organizations. For information on the City of Phoenix, please click here.

Our Programs are Prized

“When you are sitting in Phoenix and thinking of doing business in Ireland, you don’t have the knowledge of how to get it done. But the Ennis connection opened up golf exchanges to us. … Any time you rely on a Phoenix Sister City relationship, doors open wider than anything you can imagine.”  – Rob McGarey, President & CEO Southwest Retail Group, Inc. (Member of the Phoenix Thunderbirds, which puts on the Phoenix Open)

Phoenix Sister Cities offers youth the opportunity to broaden their knowledge of multiple cultures by participating in the many Youth and Education programs we offer (e.g., Youth Ambassador Exchange Program and the International Young Artist Competition).

The program also offers a valuable hands-on experience that will help form bridges of international understanding and goodwill. In an effort to increase community outreach and participation, some events have been selected that have a mass appeal and transcend cultures. Therefore, they have the ability to attract participants that may not necessarily have a specific sister city or cultural interest (e.g., Chinese Week, French Week, Evening in Prague, Global Links Business Outlook Luncheon, and Girl’s Day). Through this strategy, Phoenix Sister Cities has been able to increase and diversify its membership and volunteer base as well as involve the public in the exchanges/activities that we develop and coordinate.