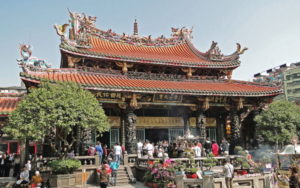 Located in Northern Taiwan, Taipei sits about 16 miles southwest of the northern port city, Keelung. Taipei is the capital of Taiwan, having a population of more than 2.6 million. Taipei and Phoenix established a sister city relationship in 1979.

Taipei expanded greatly in the decades after 1949 and, in 1967 was given the administrative status of a province. The city boasts a strong economy and diverse business opportunities in high tech, bioscience, alternative energy, and manufacturing. Taipei is known for its tourist destinations and landmarks, including: the Taipei 101 building, National Palace Museum, Grand Hotel, the Chiang Kai-Shek Memorial Hall and the Taipei World Trade Center.

Celebrate Lunar New Year 4719, the year of the Ox from the comfort and safety of your home. Enjoy our online showcase of cultural, educational, and fun activities for the entire family.

In November, the Phoenix Sister Cities and Phoenix Fire Department hosted two firefighter officers from the Taipei City Fire Department, Kuang-Ting Jui and Jia Ruei Lang. The goal of their visit was to better understand disaster management and how to allocate resources to fight against different types and scale of natural disasters. While staying at Phoenix Fire station # 12, the officers received briefings on urban search and rescue, observed fire department emergency calls, trained in handling hazardous materials and participated in ride-along and other fire department activities. They also toured the fire administration building and the dispatch center at Phoenix Sky Harbor International airport. The Phoenix Sister Cities Taipei committee hosted the officers and coordinated a welcome celebration where they were introduced to the committee members and exchanged gifts. They also enjoyed a Thanksgiving dinner, some shopping, and tours of popular attractions on Phoenix during their visit. 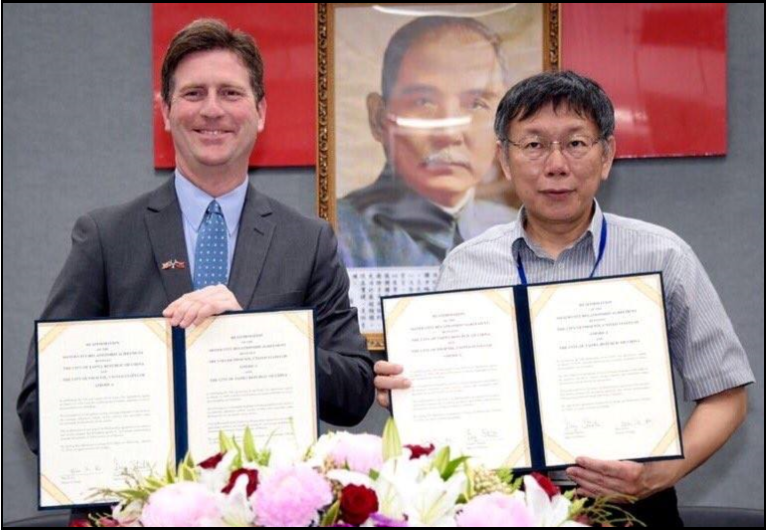 Phoenix Sister Cities and Phoenix Mayor, Greg Stanton traveled to Taipei this past October to renew its sister cities tie. Mayor Stanton is the first Phoenix Mayor to visit Taipei in 37 years! The mayor traveled with Vice President of Phoenix Sister Cities, Rick Gerard and a delegation consisting of former Taipei Committee chair, Lin Ling Lee, Taipei Committee Liaison, Wen Chyi Chi, and Taipei Committee Member, Laetitia Hua.
During the four-day trip, the Mayor had the opportunity to tour the Taipei 101, the landmark skyscraper that is known as the tallest green building in the world and the world’s second tallest building. The delegation and Mayor Stanton also had the opportunity to sit down with the Taipei City Government and Taipei Mayor KO Wen Je and signed the reaffirmation of Phoenix and Taipei sister cities relationship. Mayor Stanton attended the International Green Industry show with Vice President Chen Chien Jen and also met with TECO Electric and Machinery on October 12. During the trip, the delegation had the opportunity to ride and sit down with the Taipei Rapid Transit in order to gain insight on public transportation and ways that these ideas can be applied to Phoenix. Mayor Stanton also attended the Network of Cities Meeting where a memorandum of understanding was signed. The following day, Mayor Stanton attended the opening ceremony for the International Design House Exhibition with Taiwan President, Tsai Ing Wen and Taipei Mayor, KO Wen Je. During the ceremony President, Tsai Ing Wen, Taipei Mayor, KO Wen Je, and Mayor Greg Stanton Sealed the memorandum of understanding between the two sister cities.
That same day, the Mayor and the Taipei Committee Delegation visited the Commercial Section of the American Institute which assists US exporters to Taipei. The day was concluded by touring the National Palace Museum and Visiting the Taipei City Council. The final day of the trip Mayor Stanton and the delegation visited OBI Pharma, Inc, and the Chiang Kai Shek Memorial Hall. The Mayor and the Delegation were treated to a luncheon that same day by The Director General of Department of North American Affairs, Christine M Y Hsueh. Mayor Stanton concluded his trip by meeting with EVA Air Corporation, Derek Chen. During the meeting, the Mayor had the opportunity to tour their training center and learn about their programs. Mayor Stanton and the Taipei Committee Delegation would like to thank everyone who took the time to meet with them during their short time in Taipei. Phoenix Sister Cities is honored to work with this thriving city and hopes to continue to build prosperous relationships between the two cities. 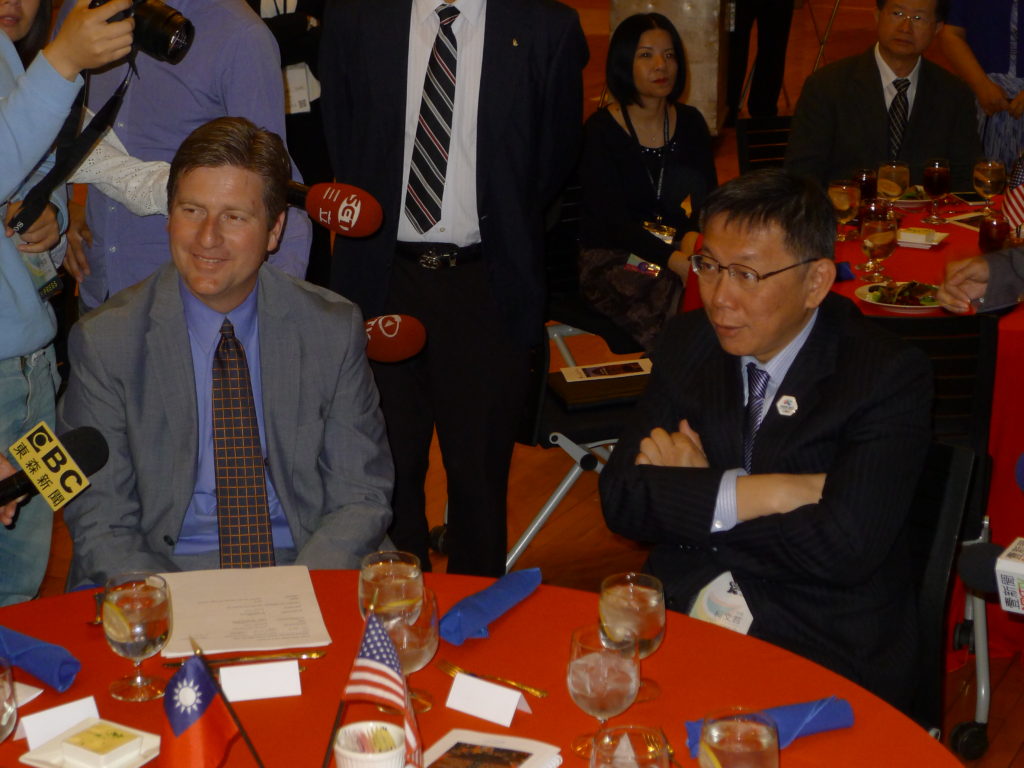 The city of Phoenix was honored to welcome Mayor KO Wen-je of Taipei who led a 26-member delegation to Phoenix, March 13-14. The delegates were Taipei City government officials and 18 members of the Taiwanese media.  This was the first visit to Phoenix of a Taipei mayor since 2003.  Mayor KO is an avid cyclist and instead of a private car, he toured downtown Phoenix on the City’s GridBike, a bike share program. Mayor KO was joined by two members of the Taipei City Council and accompanied members of Phoenix Spokes People, a partner in the GridBike program.  Former Phoenix City Councilman Claude Mattox and his wife, PSC Commission member Sherri Fagan, hosted a welcome reception and dinner for the delegation.  Vice Mayor Kate Gallego welcomed Mayor KO at the rooftop gathering on behalf of the City of Phoenix.  PSC Taipei Committee Chair Lin Ling Lee and her Committee helped arrange hospitality for the delegation during the visit.
In addition to learning about the GridBike program, Mayor KO and his delegation toured the University of Arizona – Phoenix Biomedical Campus.  As a practicing physician, Mayor KO appreciated the opportunity to observe the medical school staff demonstrate cutting-edge technologies used in the classrooms, including a simulator for chest compression procedures.  Following the medical school visit, Mayor Stanton hosted a luncheon in honor of Mayor KO at the biomedical center. Both cities had the opportunity to present briefings on the biomedical industries in their cities.  Phoenix and Taipei have been sister cities for 37 years and Mayor KO’s visit to Phoenix was a testament to the longstanding friendship between the two cities.

The committee meets every second Thursday of the month, July, August, and December. 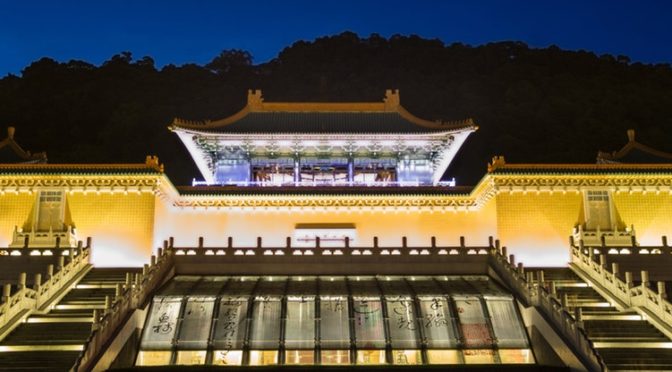 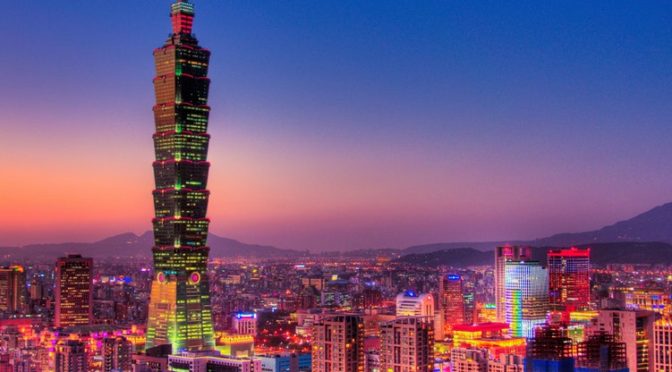 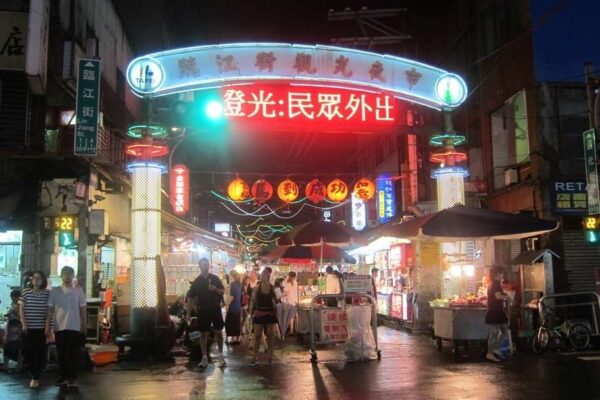 Tonghua Night MarketOne of Taipei's liveliest night markets and all the better for being more local and less touristy. There's something for everyone. Food-wise there are steaks, sushi, animal-shaped biscuits, Thai, Vietnamese, candyfloss and the best rice-wine sweet dumplings in ice in the city. Shopping wise there are lamps, jewellery, underwear, aprons, kitchenware, posters, and puzzles. 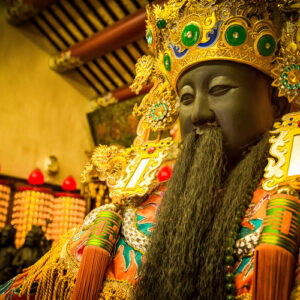 Xiahai City God TempleThis lively and well-loved temple on Dihua St was built in 1856 to house the City God statue that the losers in the Wanhua feud took as they fled upstream. Little changed since those days, the temple is a terrific spot to witness folk worship rituals as well as admire some gorgeous pieces of traditional arts and crafts. 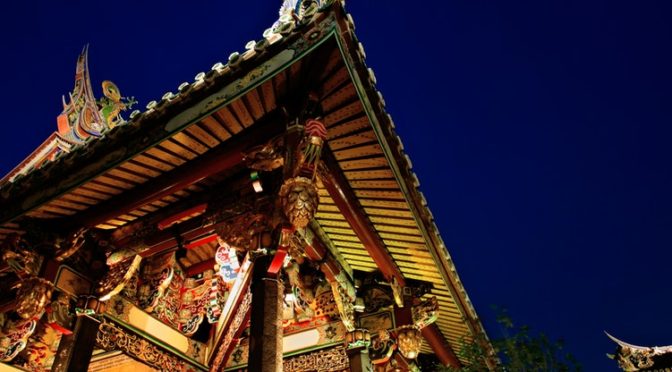 Bao'an TempleRecipient of a Unesco Asia-Pacific Heritage Award for both its restoration and its revival of temple rites and festivities, the Bao'an Temple is a must-visit when in Taipei. This exquisite structure is loaded with prime examples of the traditional decorative arts, and the yearly folk arts festival is a showcase of traditional performance arts. 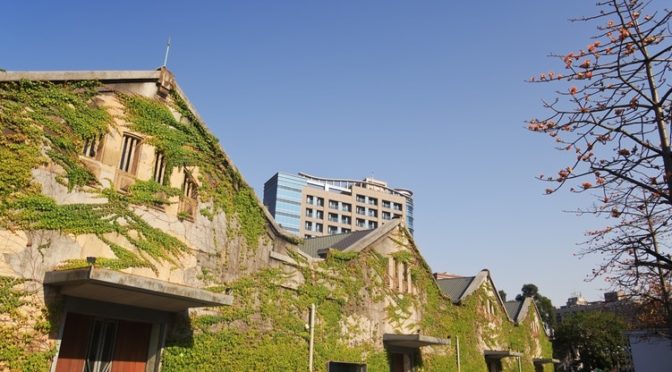 Huashan 1914 Creative ParkBorrowing from Western urban regeneration models, this early 20th-century wine factory has been restored into Taipei's most retro-chic venue. Remodelled warehouses now hold live music performances, shops sell innovative Taiwanese-designed products, and a host of stylish restaurants, cafes and bars will have you loving the ambiance as much as the food. 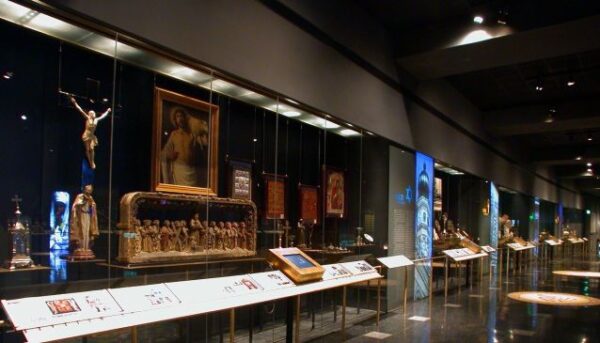 Museum of World ReligionsThough founded by a Buddhist order, this museum aims not to promote Buddhism, but to build harmony by showing the commonality of all religions. Highlights include detailed scale models of the world's great religious holy sites. 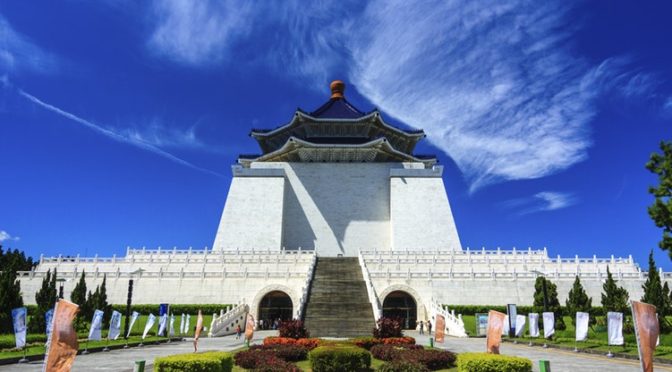 Chiang Kai-shek Memorial HallThis grandiose monument to authoritarian leader Chiang Kai-shek is a popular attraction and rightly so. It is a sobering feeling standing in the massive courtyard. Chiang's blue-roofed hall is a prime example of the neoclassical style. 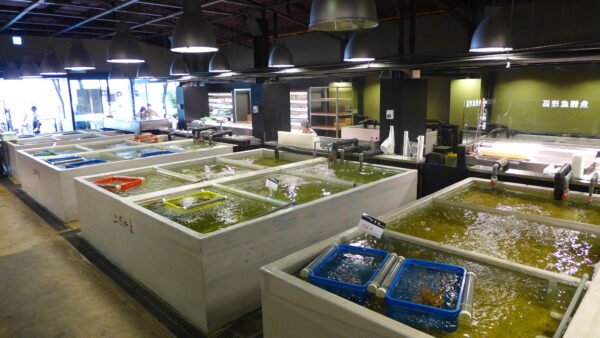 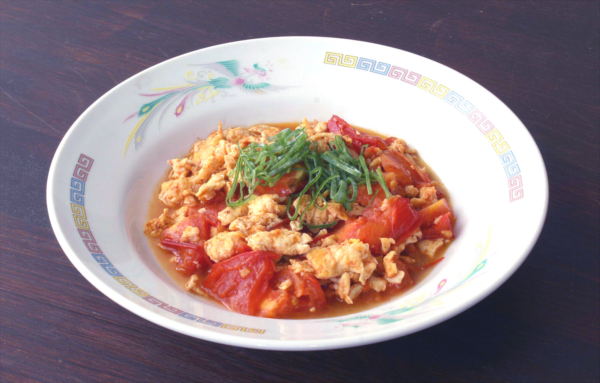 Oriental Cuisine Guizhou DihuaTaipei's first Guizhou restaurant. The interior is upscale but relaxed, and dishes are authentic and well presented. There's no menu; order from your smartphone or the restaurant's tablet. 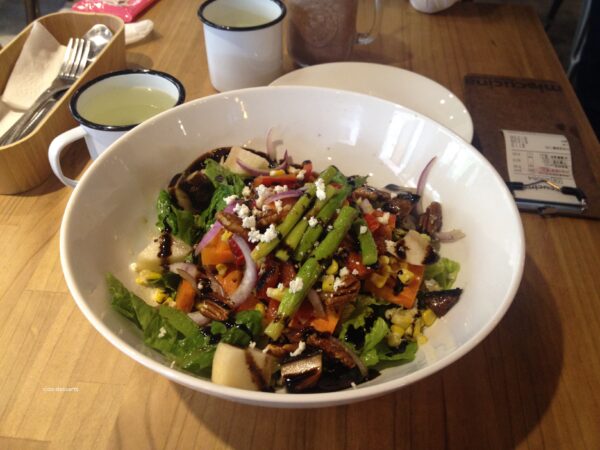 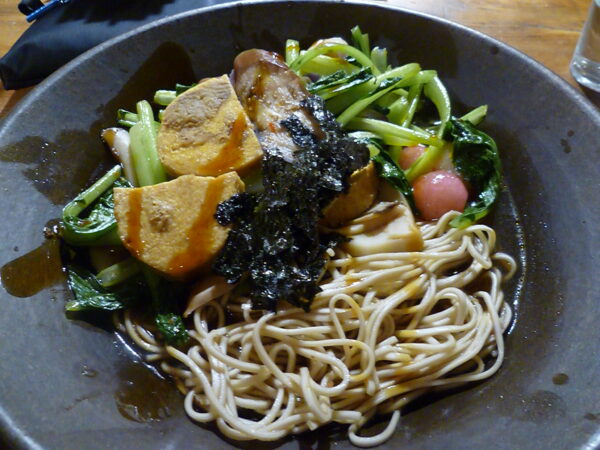 Vege Creek RestaurantOne of Taipei's best vegan restaurants. The novelty here is you choose the ingredients for a tongue-banging noodle broth – fill the plastic holdall with your choice of vegetables, fake meats, tofu, noodle type and tubes of fresh leafy goodness. Inexpensive, healthy and filling. 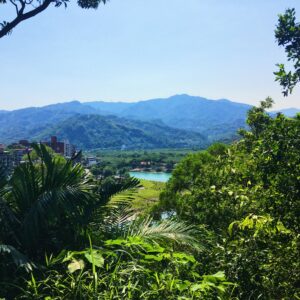 Hemeishan MountainA wonderful oasis, this low mountain affords a couple of hours' hiking in lush forest with genuinely outstanding views of the higher mountains heading south and across Taipei. 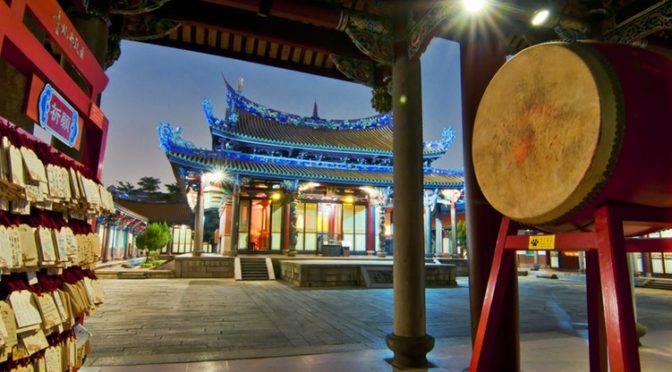 Confucius TempleConstructed by the famous Fujian craftsman Wang Yi-shun in the late 1920s, this temple is a beautiful example of Minnan (southern) style architecture and of Taiwan's delightful local decorative arts. Throughout the temple there are informative displays (in English) on the history of Confucius, the temple and the Six Confucian Arts (such as archery and riding), many of which are interactive and fun for inquisitive children. 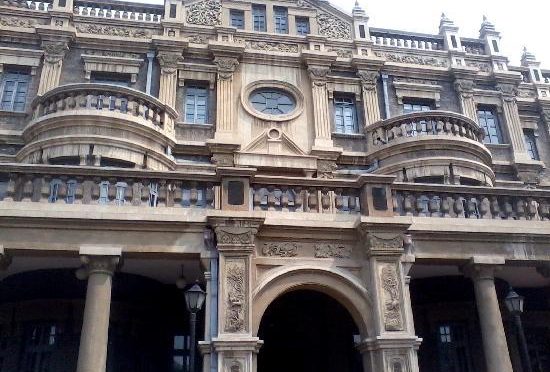 Former Residence of Marshal ZhangThis gorgeous collection of old Japanese buildings was once the Xin Gao Hotel, used to wine and dine kamikaze pilots before their last flight. It's now a high-end restaurant and a hot-spring spa with private rooms sporting black-slate tubs, tatami floors and dreamy views. 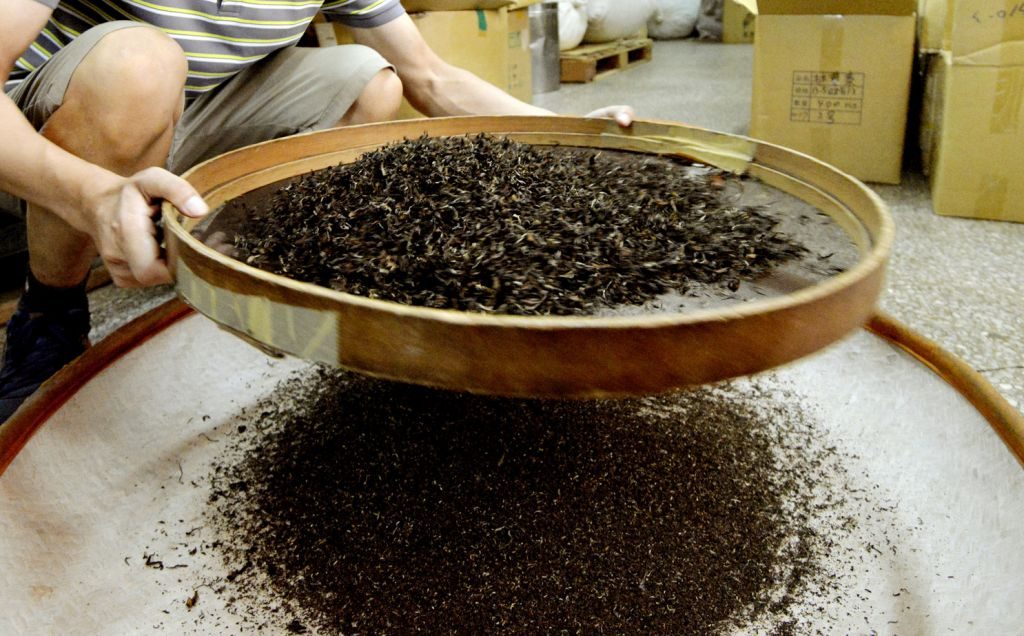 Lin Hua Tai Tea CompanyThe oldest tea-selling shop in Taipei, dating back to 1883. The current fourth generation merchants are more than happy to talk tea and let you sample the wares, which sit in large metal drums about the warehouse. Ask for a tour of the tea factory in the back. 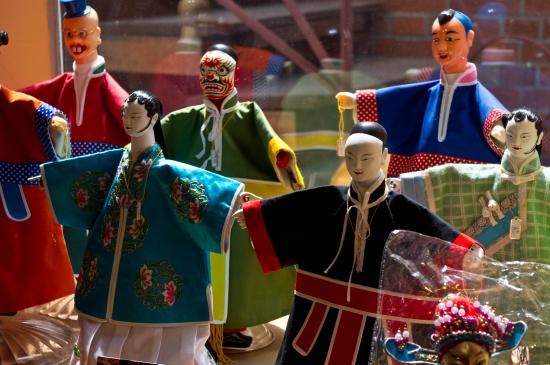 Taiyuan Asian Puppet Theatre MuseumA combination interactive museum, workshop and theatre, this complex is a must-visit for anyone interested in traditional performing arts. For starters, the Asian puppet collection here is the largest in the world. 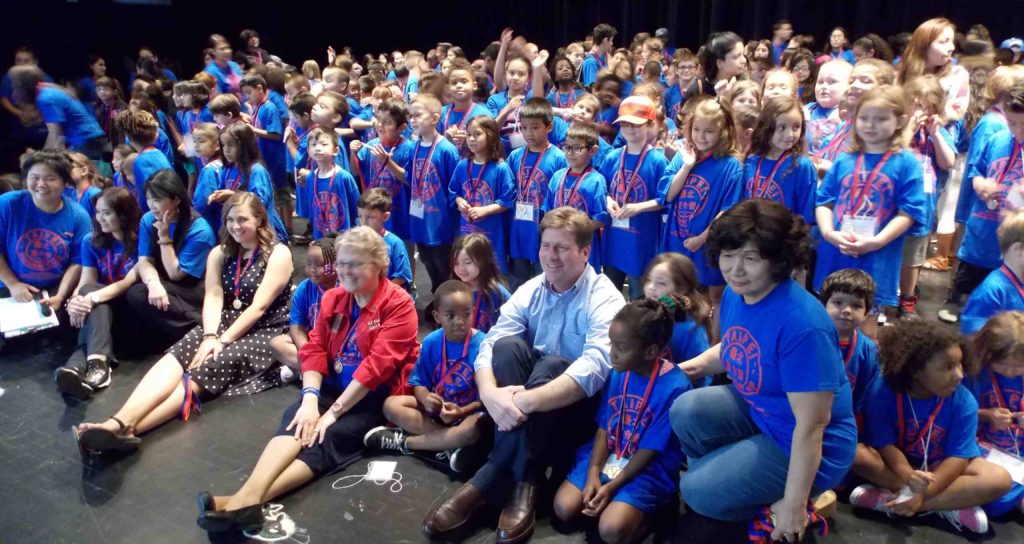 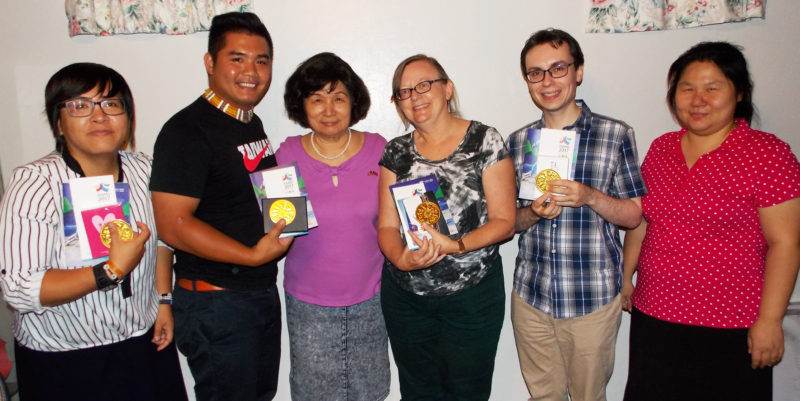 At the invitation of Taipei Committee members Lin Ling Lee and Wen Chyi Chui, Mayor Greg Stanton toured the Taiwan Arts Exhibition on display in the atrium of City Hall on June 26th. The exhibit promoted global arts and culture awareness and diversity; acknowledged the talents of Taiwan young artists; and demonstrated the positive impact of arts and culture on the world.

On behalf of young artist Szu Hua Huang, and in honor of the 38-year sister cities affiliation between Phoenix and Taipei, Lin Ling Lee and Wen Chyi Chiu presented a calligraphy piece to the Mayor. 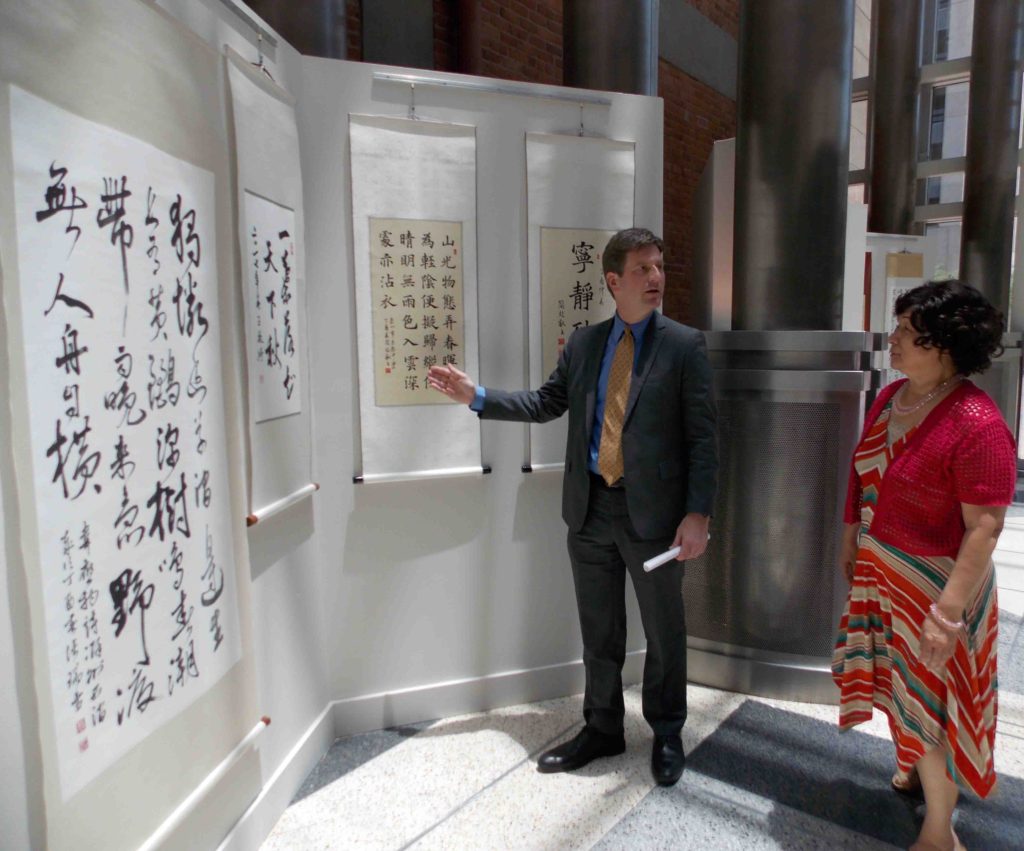 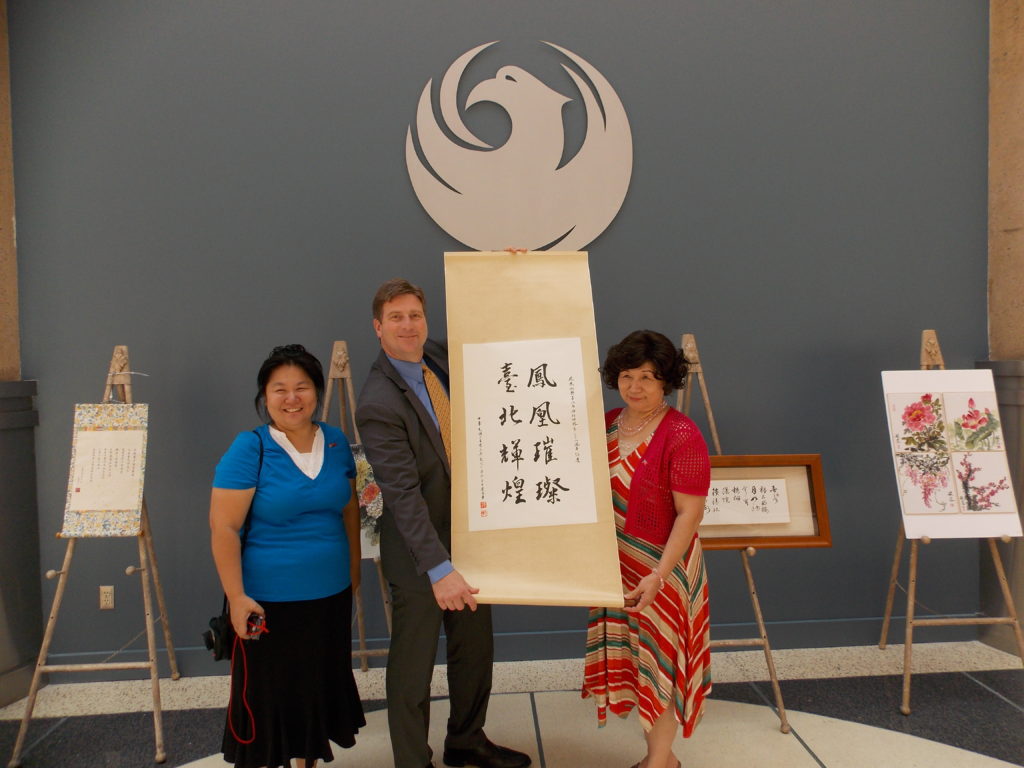 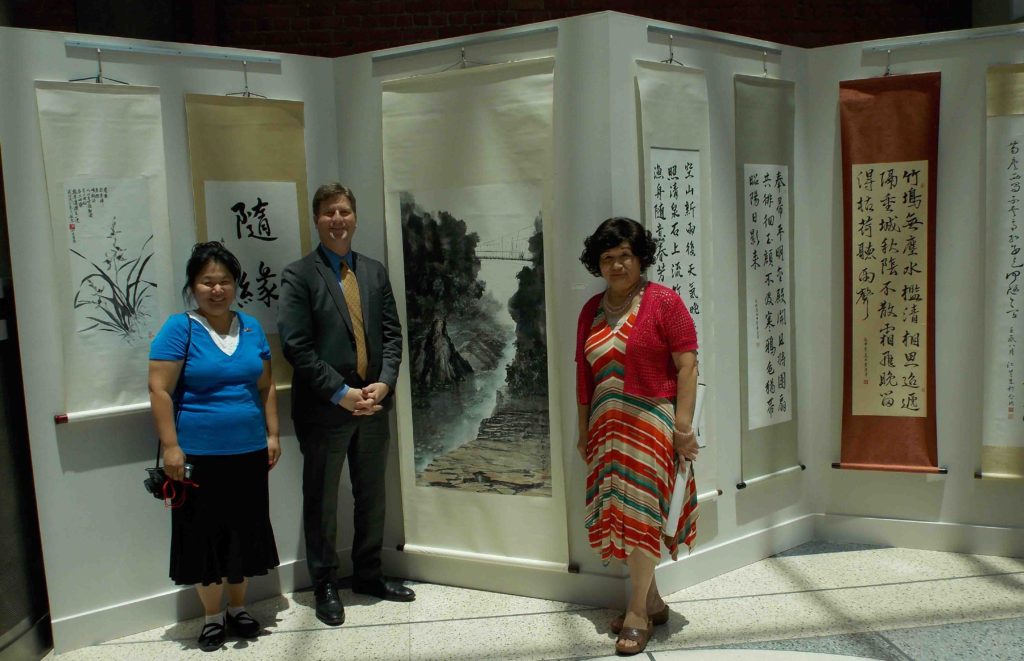 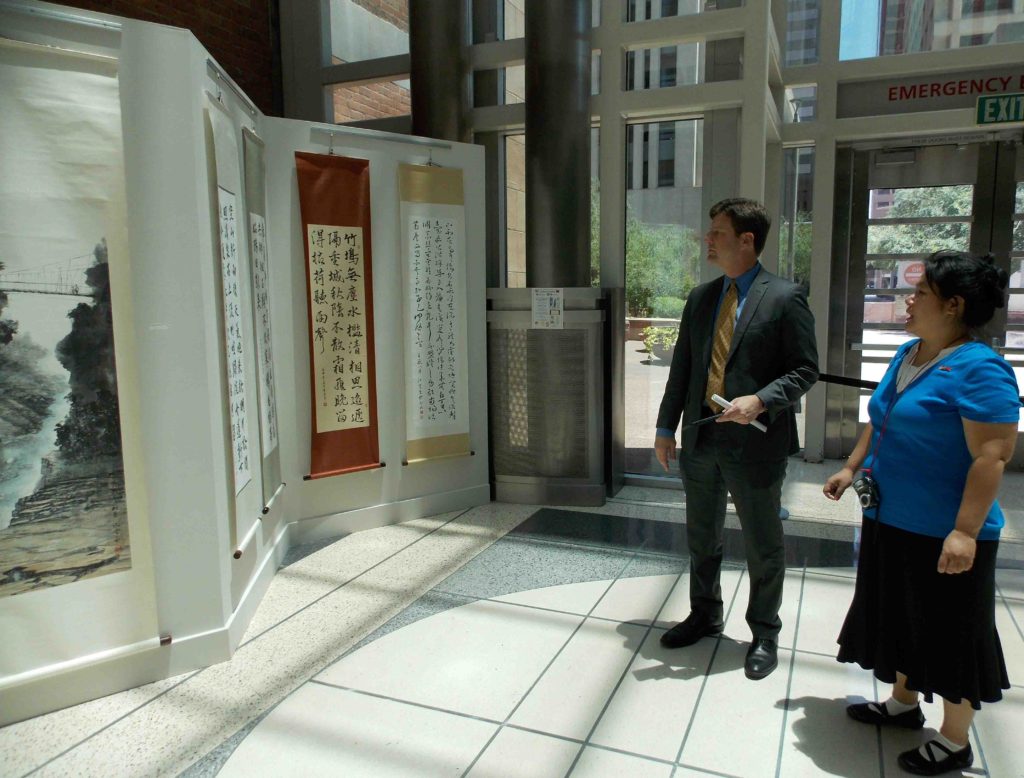