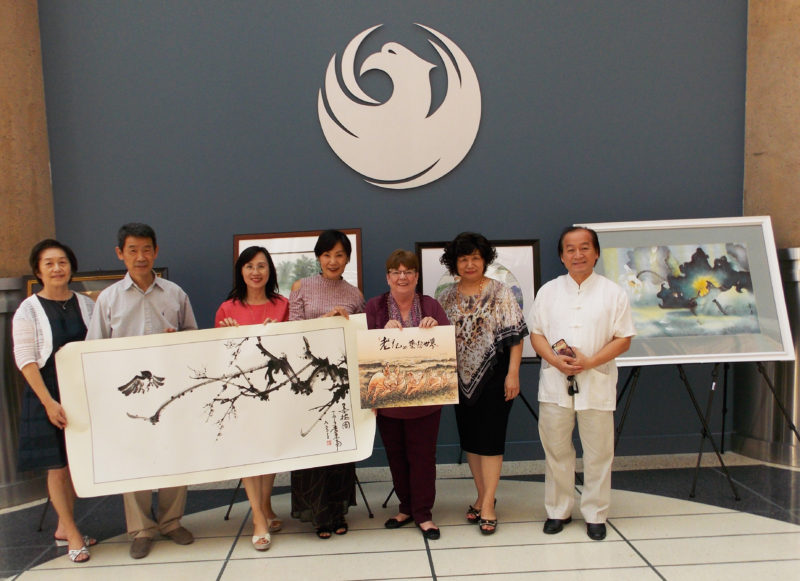 A Taiwan Arts Exhibition featuring five Taiwanese artists: Peter Lee, Michael Soong, Grace Chu, Stella Kwan, and Chris Ho is on display at Phoenix City Hall. Their exhibit runs from September 18 to 29 at City Hall and from October 2 to 20 at the Arizona Capitol Museum. These displays honor Phoenix and Taipei’s 38-year sister city relationship in addition to Arizona and Taiwan’s 37-year sister state relationship.  Both relationships have been very active over the years.

Hosting this international art exhibit from Taiwan as well as having the artists themselves visit involved fundraising and coordination between these in-demand artists in order to bring the exhibit to fruition.

Hosting Taiwan arts exhibitions in Phoenix enriches the arts and culture of the community; promotes global arts, cultural awareness and diversity; and, contributes to a positive economic impact through the arts for Phoenix.  Phoenix Sister Cities Taipei Committee is most grateful to Mayor Greg Stanton and the Phoenix City Council for their strong support of Sister Cities and the visual arts.

Live demonstrations of the art, given on September 18, 2017, will be aired on Phoenix Channel 11 and can be found here: https://www.youtube.com/watch?v=0K5da_esKnA&feature=youtu.be.