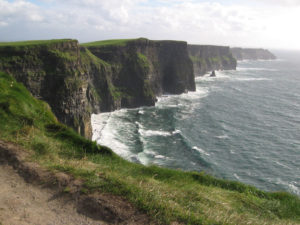 Ennis, County Clare, Ireland, is home to more than 32,000 people and is situated on the banks of the River Fergus. Ennis takes its name from Inis, the Irish word for island, and was founded in the 1200s. It is the capital of County Clare in the west of Ireland and is the center of administration and commerce for the county. Ennis and Phoenix established a sister city relationship in 1988.

The history of Ennis is closely tied to the O’Brien dynasty, descendants of Brian Boru, King of Ireland during the 11th century. In the 12th century, the O’Briens left their seat of power in Limerick and built a royal residence at Clonroad, now known as Ennis. Ennis was voted the “Friendliest town in Ireland” as well as winning the “Tidiest Town” award in 2012. Ennis is known for its thriving traditional music scene, numerous pubs and fantastic restaurants.  With its narrow, medieval streets and lanes, Ennis is a pleasant blend of the historic past and the active present.

“As the capital of a renowned music county, Ennis is bursting at the seams with pubs featuring live sessions almost every night of the week. In fact “it’s one of the best reasons to stay here”

It is with a heavy heart that Phoenix Sister Cities announces the passing of longtime friend TJ Waters. TJ Waters was a former chairman and longtime member of the Ennis Twining board. TJ was a valued friend and colleague with a vast history of community involvement. His leadership and passion for discovery and change brings true meaning to our motto: “Discovery Changes Everything.” His commitment to the sister city relationship will be dearly missed, but never forgotten. TJ made a deep impression upon the Phoenix Sister Cities community, especially with the marching band students at St. Mary’s High School who traveled to Ennis in 2013 for the St. Patrick’s Day Parade, as well as the many Phoenix and Ennis youth ambassadors who traveled to each other’s city over the many years that TJ was involved in Ennis Twining Board activities. The connections TJ made between the people of Ennis and the people of Phoenix will continue to flourish and last a lifetime. Phoenix Sister Cities sends our deepest sympathies to the family and friends of TJ Waters.

Below are a few photos of TJ fulfilling one of his passions, Phoenix – Ennis Sister Cities!

Visit the Ennis city website
Explore with an Interactive Map of Ennis
For news, read The Clare Herald or The Clare Champion
Check out the Irish Cultural Center in Phoenix

An Evening with Consul General of Ireland Orla Keane 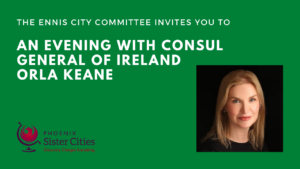 Ms. Keane discussed with Ennis Committee Chairwoman Mary Hill Connor about opening Ireland’s seventh and newest diplomatic mission in the US (Los Angeles), the enhanced investment in the Western US by the Government of Ireland especially as it relates to Ireland’s creative industries (television, film, animation), engaging the new US administration on COVID, and Brexit in Ireland. 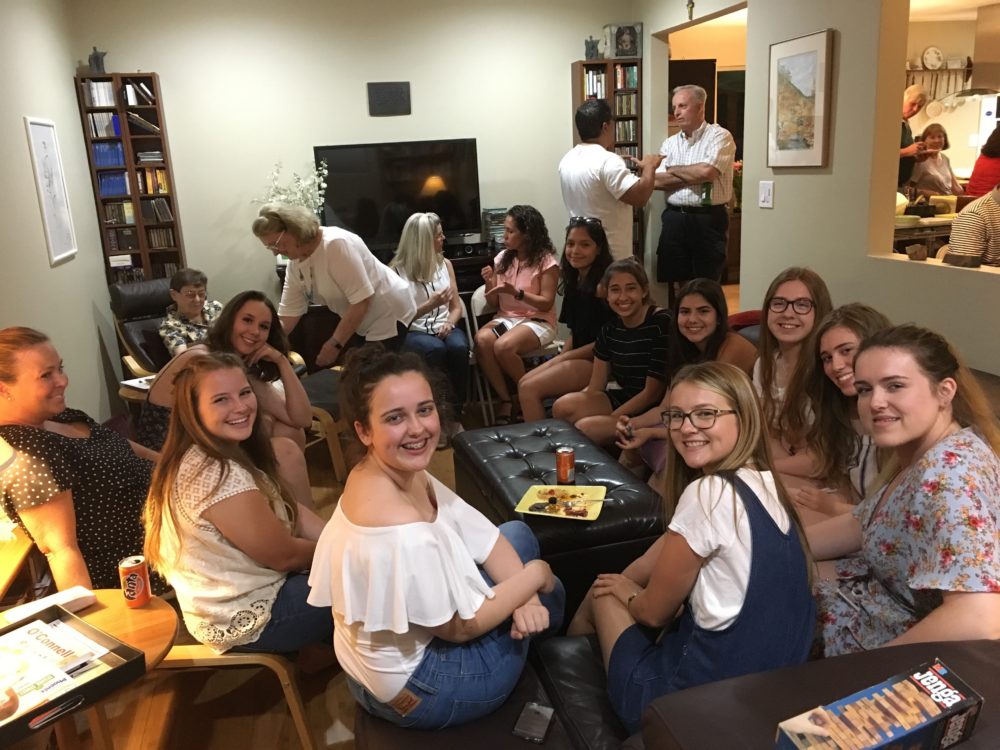 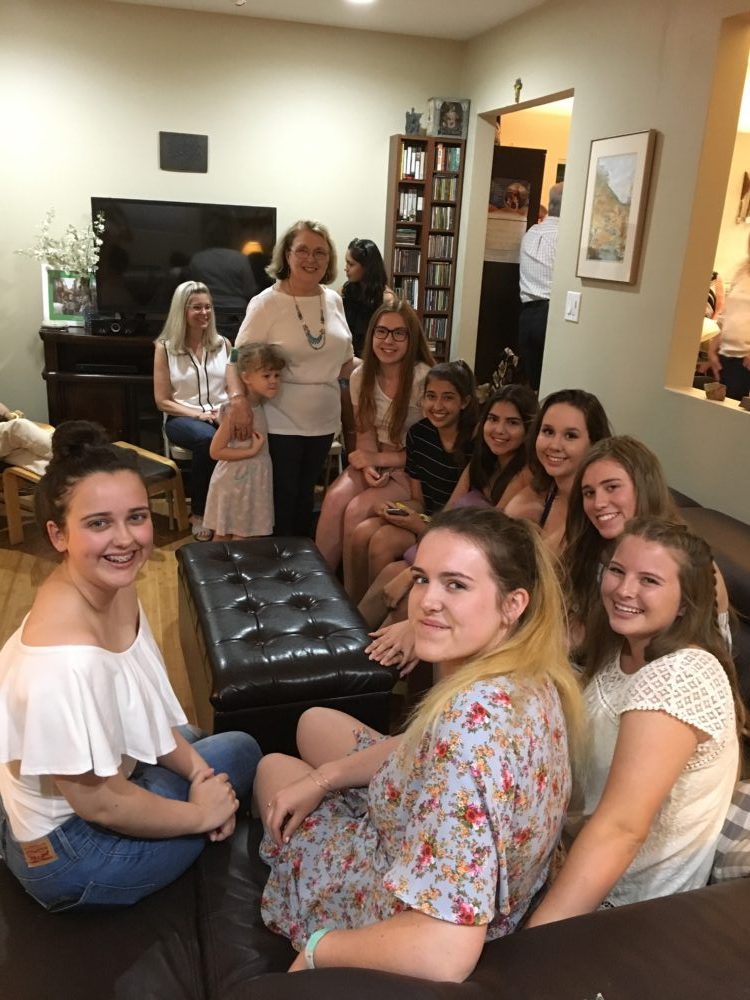 A cheerful group gathers and exchange stories from abroad 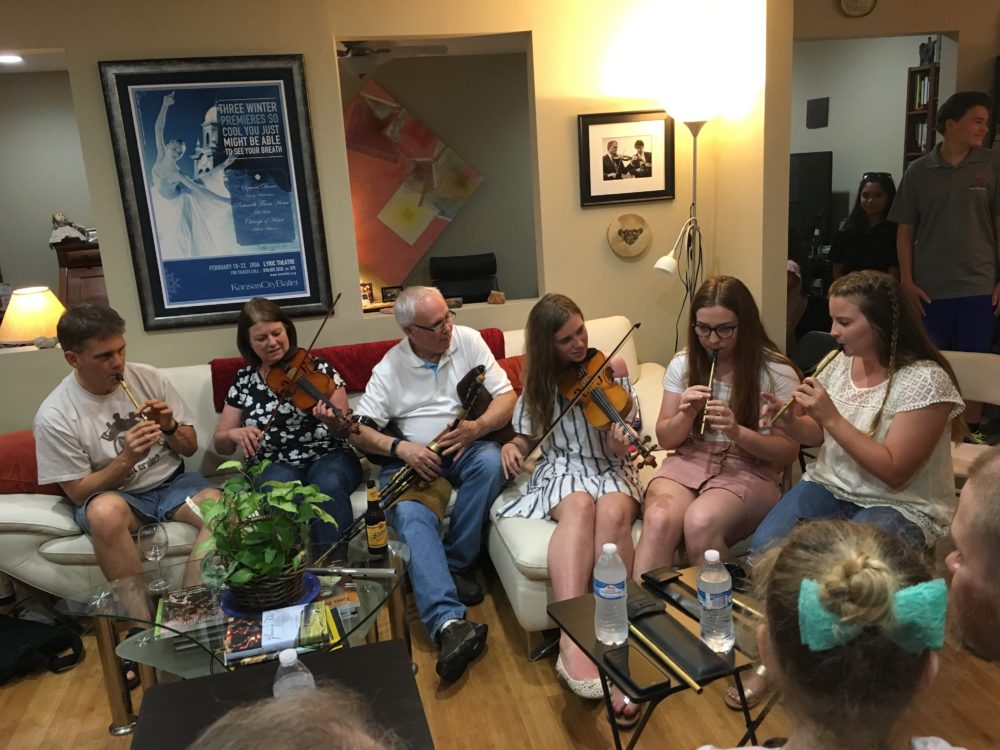 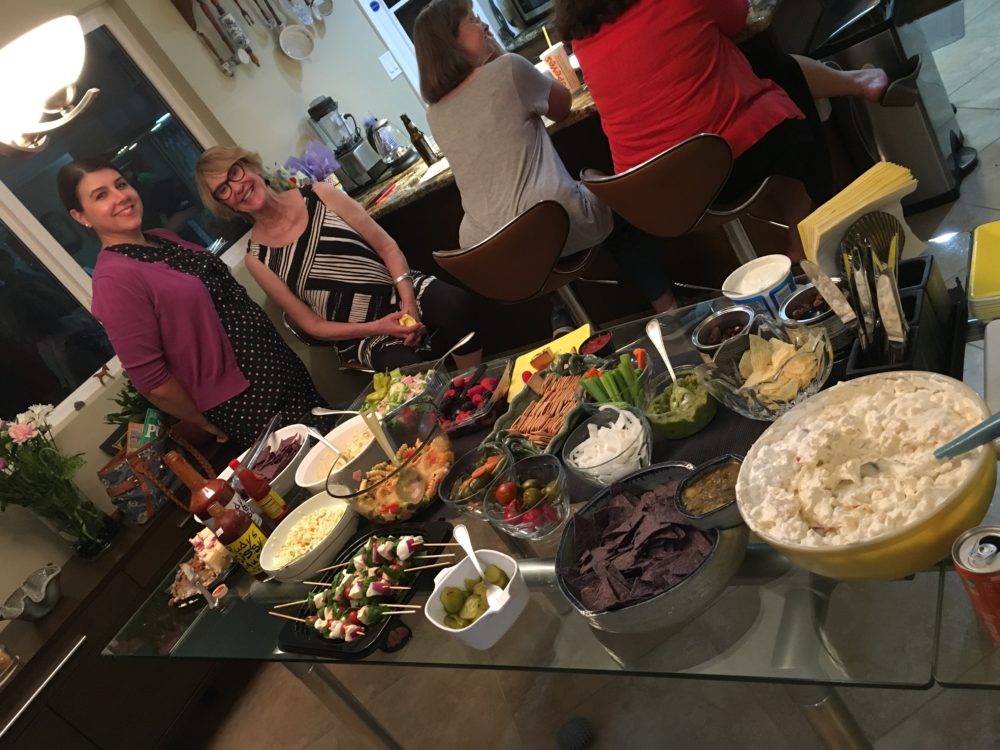 The Phoenix Sister Cities Ennis Committee is dedicated to promoting friendship and understanding between the cities of Phoenix and Ennis through a variety of programs. The committee participates in the Phoenix Sister Cities Youth Ambassador Exchange Program, as well as the St. Patrick’s Day Parade and Irish Faire. It also supports the Irish Cultural Center, coordinates an annual 5K Run/Walk, and promotes business opportunities between the two cities. The Ennis Committee meets monthly and welcomes new members.

The committee meets every third Wednesday of the month, except July, August, and December.

Ennis CathedralConsecrated in 1843, this impressive structure had its tower and spire added in 1894, and was elevated to the status of a cathedral in 1990. A highlight is its 1930-built organ. 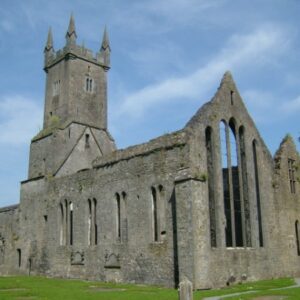 Ennis FriaryEnnis Friary was founded by Donnchadh Cairbreach O'Brien, a king of Thomond, between 1240 and 1249. A mix of structures dating between the 13th and 19th centuries, the friary has a graceful five-section window dating from the late 13th century, a McMahon tomb (1460) with alabaster panels depicting scenes from the Passion, and a particularly fine Ecce Homo panel portraying a stripped and bound Christ. 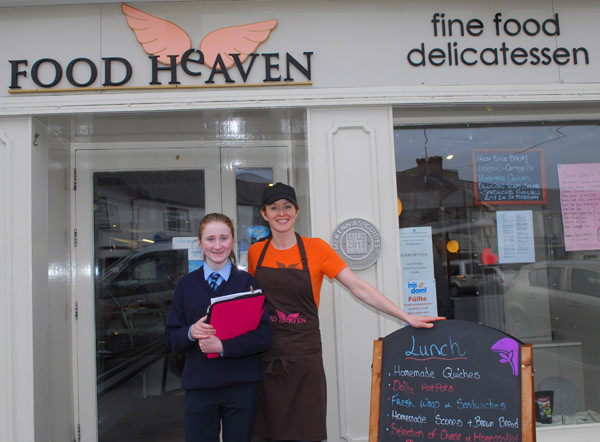 Food Heaven Cafe-DeliThis small cafe-deli does a good job of living up to its ambitious name with creative and fresh fare. Omelettes such as goat's cheese and cherry tomato or mushroom and thyme are a highlight at breakfast. Be ready to queue at lunch for renowned brown-bread sandwiches, hand-rolled sausage rolls with homemade tomato relish, and potato cakes with sweet chili mayo. 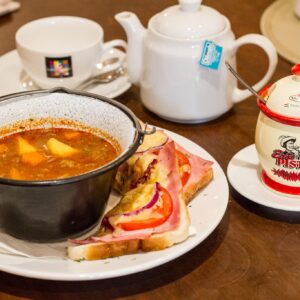 Souper CafeSix soups feature daily at this cosy cafe, such as goulash, roasted vegetable or chicken and tarragon, accompanied by brown bread and butter. Paninis, wraps and sandwiches offer further sustenance if you want to make a meal of it. 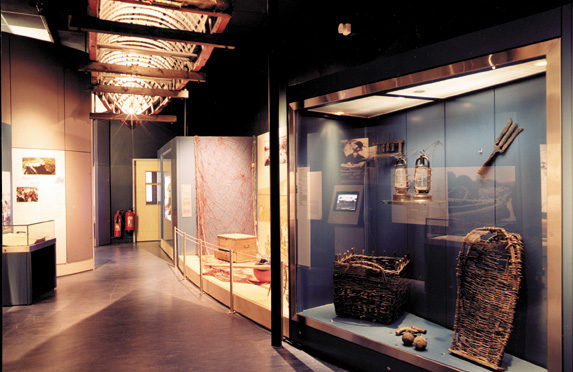 Clare MuseumThe 'Riches of Clare' exhibition tells the story of Clare from 8000 years ago to the present day using authentic artefacts grouped into five themes: earth (geology, seasons and agriculture), power (such as hill forts and tower houses), faith (Christianity's influence), water (the county's relationship with the River Shannon and Atlantic) and energy (particularly Clare's musical and sporting prowess). 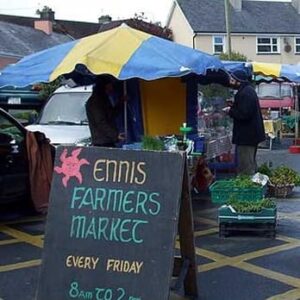 Ennis Farmers MarketEnnis' farmers market, 2.8km northeast of town, just off the R352, draws some of the county's best producers. All produce must be grown, reared, caught or made by the stallholder in Clare. 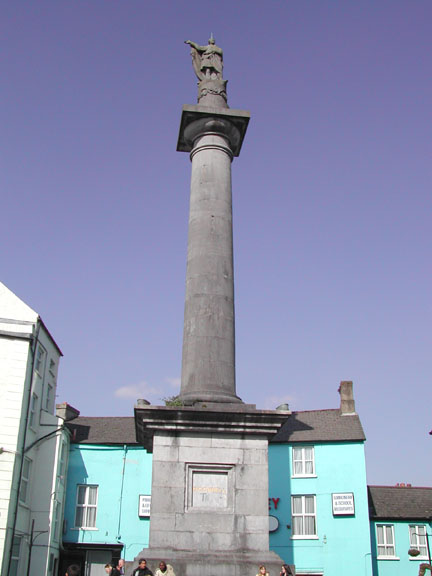 Daniel O'Connell MonumentPerched on a soaring column, a statue of Daniel O'Connell (aka the 'Great Liberator') presides over the Square. O'Connell's election to the British parliament by a huge majority in 1828 forced Britain to lift its ban on Catholic MPs and led to the Act of Catholic Emancipation a year later. 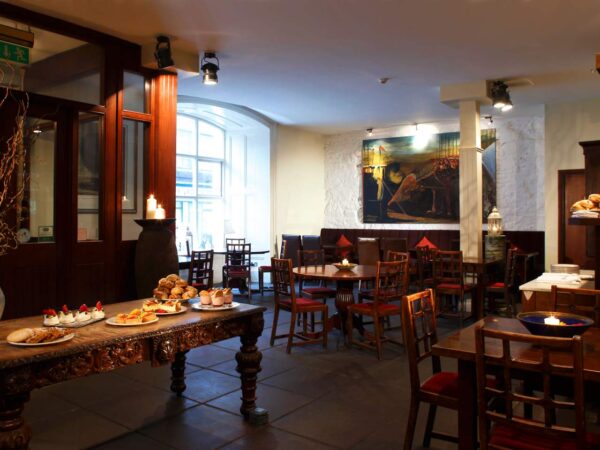 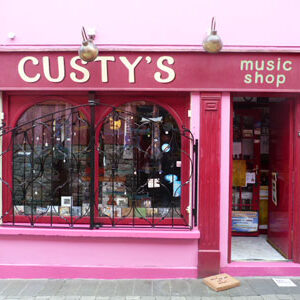 Scéal Eile BooksA delight to explore, this emerald-green-painted bookshop overflows with new and secondhand literature including rare titles across all genres from poetry to sci-fi and travel. A stove at the rear, ensconced between two armchairs, creates a wonderfully cosy atmosphere. Book readings and cultural events regularly take place. It also buys secondhand books. 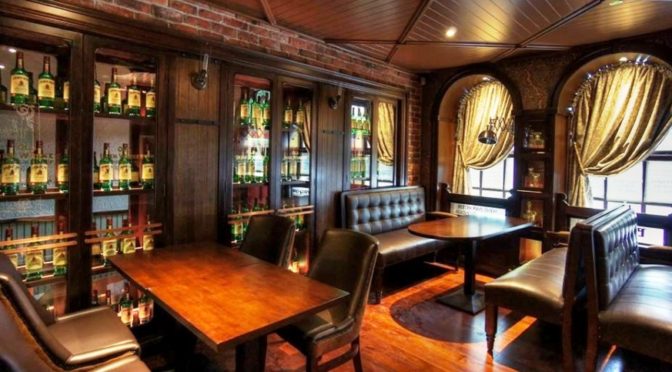 Brogan's Bar and RestaurantBrogan's rambles from one room to the next, with musicians playing traditional instruments such as tin whistles, fiddles, accordions and more most nights. Cider-steamed mussels, steaks, and fish and chips cooked in beef dripping are on the menu. 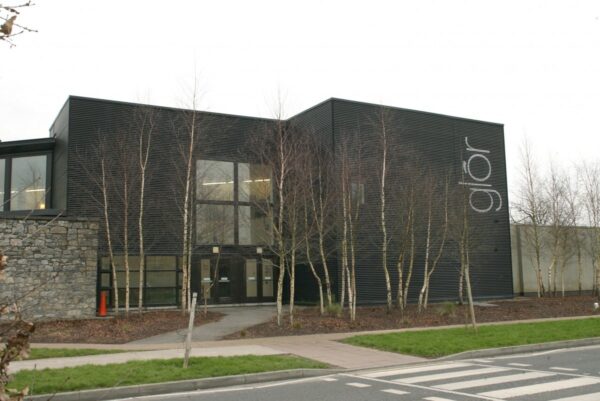 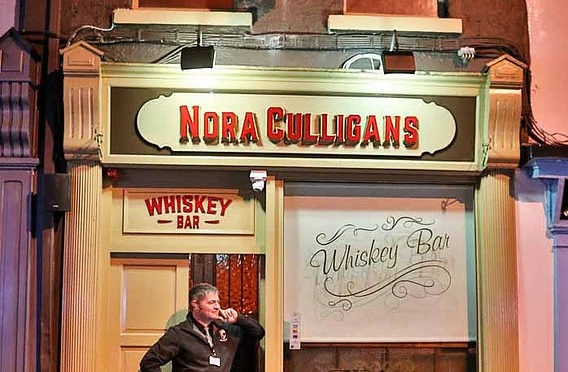 Nora Culligans BarMagnificently restored, cavernous pub Nora Culligans retains original features including the front bar's ornate two-storey-high whiskey cabinets and timber panelling in the back bar. It's an atmospheric venue for live music across a diverse array of genres, from jazz and blues to acoustic singer-songwriters and reggae as well as trad.